Ask Linda #740-Gully in side of bunker

Linda, a recent rainstorm left a six-inch deep gully crack in the side of a bunker. No casual water was present, but the sand was damp and hard. The ball was deep in this crack. Is there any relief for an abnormal ground condition?
Lulu from Utah

There is no relief from cracks in the earth unless the area is marked as ground under repair. However, there is certainly justification for marking such an area as GUR. If no Committee member is available to review the problem, you may play two balls under Rule 3-3 and find out later (before you sign your scorecard) if the Committee will rule in your favor. You would play one of those balls under Rule 25-1b [Relief from Abnormal Ground Conditions] and play the other either as it lies or under Rule 28 [Ball Unplayable]. Before you play either ball, you would have to mention to another player which ball you prefer to count should it be decided that it was played correctly under the Rules.

I have a rules question.

A player, playing a par 3, hits his tee shot. Reaching the green and surrounding area, he searches for his ball. He cannot find his ball. After a few minutes (less than 5minutes was said by playing partners) he takes a club and proceeds to the tee box to replay the shot. As he approaches the tee box, his playing partner finds his ball (assuming it is within 5 minutes). The player plays 2 balls, i.e. his original ball and he tees off again with the second ball and completes the hole with both balls (reason for this is unsure of the rules).

What is the ruling and which ball is in play?

A player is entitled to play two balls when he is not sure of the correct procedure [Rule 3-3]. He should announce that he will play two balls, and indicate which ball he would like to count. He must indicate he will play two balls before he hits either of them. He must report his action to the Committee prior to signing his scorecard. If he follows these procedures, the Committee will rule that the score with the original ball counts, since it was played correctly under the Rules [Decision 3-3/0.5]. The player’s score on the hole is 4.

If the player does not indicate in advance of playing either ball that he will play two balls and let the Committee sort it out, the score with the second ball will count. Once the player has hit a second shot from the teeing ground without invoking Rule 3-3, that second ball is in play under stroke and distance [Rule 27-1a]. The player’s second tee shot is his third stroke on the hole. The original ball is officially “lost.” [Definition of Lost Ball]. The player incurs no penalty for also playing the second ball.

It all boils down to a matter of timing and communication. If the player tells his fellow competitors that he will play two balls because he is unsure how to proceed, he communicates his intentions before he hits either ball, and he reports the incident to the Committee before he turns in his scorecard, the first ball will count and his score is four. If he makes his announcement after he hits the ball from the tee, that ball counts and his score is 5.

Dear Linda,
When a player takes relief on the line of sight, may he/she go further back than the place from where the ball was hit?
Best Regards,
Lou from Belgium

Yes. There is no limit to how far back on the line-of-sight to the hole the player may drop his ball [Rules 26-1b, 28b].

Recently four of us were playing Match play.

All four balls were on the green. The player furthest away from the hole asked his partner to leave the ball so that he could use it to line up his putt. When he played his shot his ball hit his partner’s ball and went into the hole.

Who gets penalized, the player putting, the player who left the ball there, both or neither? I’m guessing this comes under rule 9.2 b??

It was a friendly game between mates so didn’t really matter but we did have some fun discussing the rights and wrongs of what happened but came to no conclusion.

I think the answer may surprise you, Lou.

In match play (as opposed to stroke play, which I will address later on), there is no penalty if a player putts his ball on the green and strikes another ball on the green. Neither the player nor his partner is penalized when the one ball ricochets off the other ball into the hole, and the ball is holed [Rule 19-5a].

However, a player is always entitled to have another ball lifted if he feels it will assist anyone’s play [Rule 22-1]. One of the opponents should have told the player to mark and lift the ball that was in a position to help his partner. Since neither player on the opposing team thought to make this request, they are stuck with the result.

Stroke play is an entirely different story. When a player putts from on the green and his ball strikes another ball on the green, the player incurs a two-stroke penalty. The moved ball must be replaced; the ball that was putted will be played as it lies.

Dear Linda
I understand the rule regarding the OB Wall is fixed and no free relief is given when the ball lies against the wall.

We have a case where an eight foot wall is supported by very large (36” in diameter) concrete posts at a 45 degree angle towards in bounds, some 3 feet away from the wall. Between the posts and the wall is a clear area for a player to walk under…but the posts are clearly in bounds but attached to the very high wall.

My question is: if a ball lies in bounds near the very large supporting posts that hold up the wall, but not against the wall, would I be right in saying if it interferes with your stance or swing there is relief with no penalty? We are talking about the base of the post 3 feet in bounds away from the wall, with the posts deemed immovable.

Please could you help.
Regards,
Lou from Thailand

Angled supports that extend onto the golf course are obstructions [Decision 24/2]. You are entitled to free relief if the supports interfere with your stance or swing.

Linda–
Whiffed the ball at the tee, ball fell off the tee, I picked up the ball to re-tee but moved my tee to a different spot before taking my next stroke. What number will I be playing now?
Lulu from Ontario

Let’s start with the correct procedure.

Let’s look at what you did. You tried to hit the ball and missed (stroke #1). You lifted your ball in play and returned to where you hit your previous shot (I understand this was a very short walk – stay with me here). You re-teed the ball in a different spot that was still within the teeing ground. This is called playing under stroke and distance, which includes a one-stroke penalty. Your second tee shot is your third shot on the hole.

When a player elects to return to where she hit her previous shot, and the location happens to be the teeing ground, she may play the ball from anywhere within the teeing ground and the ball may be re-teed [Rule 20-5a].

Hi Linda,
Is it simply bad etiquette or actually a punishable rule infringement to stand behind your opponent to study the line of his/her putt?
Thanks.
Lou

It is a violation of etiquette. If your opponent or fellow competitor asks you to move, it is expected that you will honor that request. This information can be found in Section I, Etiquette, in the front of your rulebook, under “Consideration for Other Players.”

The answer is not the same if the player’s partner or either of their caddies stands behind the ball (to the right of a right-handed golfer) while the player is making a stroke. In this case, the player incurs a two-stroke/loss-of-hole penalty [Rule 14-2b]. For a detailed explanation, please read Ask Linda #535- Standing behind partner, published on October 5, 2012. Here is the link: http://lindamillergolf.blogspot.com/2012/10/ask-linda-535-standing-behind-partner.html 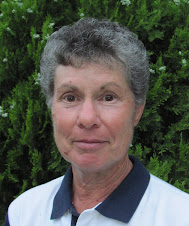